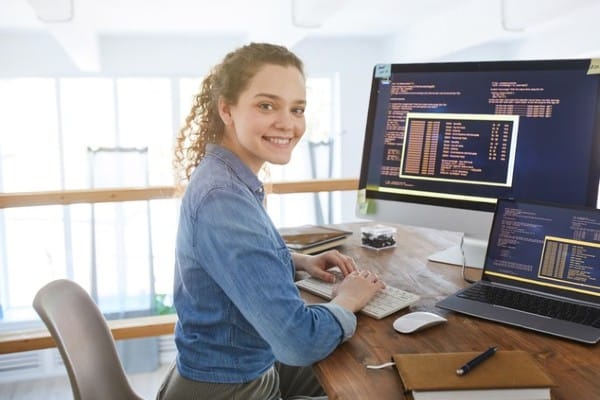 Learn More About Computer Programming and IT

Here is a coding languages list of some of the best to know in 2022, as well as one important non-programming language you should know.

C# is a general-purpose language largely used for developing Windows, web, and mobile applications. It requires the .NET framework on Windows to work. C# is also widely used for video games and anti-hacking software.

C# was developed in 2000 at Microsoft to rival Java, which is also on this list.

According to the TIOBE Index of programming languages in October 2021, C# was the fifth most popular language.1 C# predecessors C and C++ took second and fourth, respectively.

Java is an object-oriented programming language. It is used for most back-end development with Android and big data applications. Java is also commonly used for desktop applications, mobile computing, games, and numerical computing.

Java was developed in the early 1990s.

According to TIOBE, Java is now the third most popular programming language.

JavaScript is used for interactive web applications, such as interactive images, carousels, and forms. It can be used with back-end frameworks such as Node.js for such uses as processing and payments.

JavaScript is used both on the client side and server side, making it important to the formatting and use of web pages. 95% of the world’s web pages run JavaScript.3

JavaScript is the seventh most popular programming language.1

PHP is a side-scripting language embedded in HTML, which adds functionality to websites without calling out to external files. It can manage databases, dynamic content, session tracking, and even e-commerce.

PHP can be used on all major operating systems.

PHP is open source; therefore, it’s free to install and use.

TIOBE ranks PHP as the ninth most popular programming language.

Python is a high-level, general-purpose programming language. It is designed to be highly extensible and modular.

Python employs a simpler grammar and syntax to help developers.

Despite being one of the older programming languages still in use (since 1991), Python continues to be functional and popular.

Python was named for the British comedy group Monty Python.4

Python was ranked as the most popular programming language among users.1

R is intended for statistical computing, graphics, and reporting. It is free software.

R is widely used among statisticians and data miners for developing data analysis and statistical software.

R runs on a variety of platforms including UNIX, Windows, and MacOS.

R is the 14th most popular programming language.1

While not a programming language like the others listed here,5 SQL is a very important query language.

SQL has become the standard language for querying and manipulating data stored in a relational database.

SQL can be used by database administrators to write queries within the database management system, or it can be used in conjunction with programming languages to allow third-party software access to a relational database.