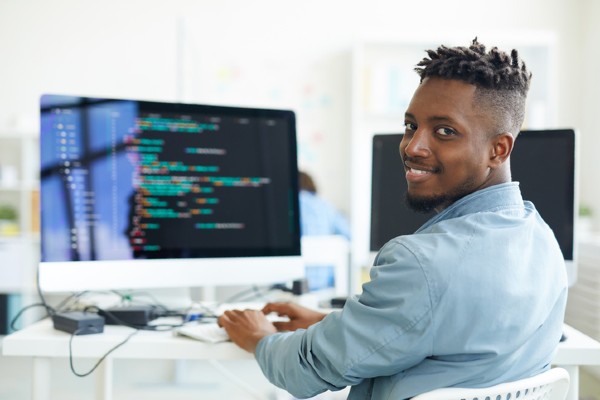 6 Myths About Software Developers and Development

It’s a stereotype as old as computing itself: the software developer, sitting in a dark room shut off from the world, banging away at a keyboard and trying to make his faulty code work.

We talked to Jason Litz, faculty member in the School of Business and Information Technology, to find out the truths about software developers and development, and why it may be a strong career choice for those interested in computers.

Here are six myths of software development and the truths about them.

1. One Programming Language Is Better Than the Rest

Litz says this belief, especially among students, arises because of the fear of learning the wrong language.

“Many students think that one programming language is going to be better than another, and they worry about which one they'll be learning,” Litz says. “I tell students all the time that all these languages are being used in a professional setting. They all have their purpose, and while some have a broader scope than others, they're all important.

“When you're in college, it's a good time to try learning different programming languages,” he says. “Find what you like. If you have a particular field you want to work in, find out what languages are being used in it. But there's not one language that’s better.”

2. The Only Thing Developers Do Is Write Code

Not true, Litz says. He says most software developers also are analysts and testers, even if the companies they work for have separate departments and specialists.

“In most cases, developers are going to act as an analyst in some capacity,” he says. “For most projects, they'll probably be the analyst and the programmer. They’ll also test code—not just the code they write but likely also code for the overall system.”

He says developers also are involved in meetings and are responsible for much of the paperwork to keep track of it all.

Litz says this is a stereotype that doesn’t apply to most software developers.

“There are people in the field who like to stay to themselves and don’t enjoy working with people,” he says. “But the golden goose is someone who’s really good at the technical side of things and can communicate well with people.

“If you can’t communicate with others, it can become a handicap. If you really want to be successful, you need people skills.”

4. Everything Will Go Well If the Team Follows the Plan

Software development is a complex, precise process that conversely needs flexibility. Planning is a must, but requirements may change, and issues can arise that may require creative solutions.

“You might as well plan that there will be a problem, because it's inevitable,” Litz says. “It would be a miracle if any project of significant size gets completed without some deviation from the plan.”

He says development isn’t necessarily linear and predictable. Instead, real software planning is a piece-by-piece process.

“Many students struggle in the beginning because they are trying to program from the top down, but that's not the way systems are developed,” Litz says.

5. The Release of the Product Is the End of the Project

Anyone who’s used software knows that it can have bugs and need updates. Just because a product is released doesn’t mean it’s done.

“I’ve never worked on a project where we felt that the release was the end,” Litz says.

“In every project I’ve worked on, once it’s implemented, you're holding your breath, fingers crossed that everything works out. It doesn’t matter how much you tested it. There always seems to be something that happens.”

He says Microsoft Office can be a good example of this.

“Microsoft doesn’t release Office and then say, ‘Well, we’re done with that version.’ There will always be security updates, bug fixes, and other maintenance repairs,” Litz says. “It’s a never-ending process.”

6. Artificial Intelligence Will Solve All Our IT Problems

Artificial intelligence (AI) operations—AIOps—are talked about as a development of the future, but a 2020 report from OverOps indicates that only 10% of respondents are even considering AI right now.

“I think people put too much stock in artificial intelligence,” Litz says. “It's still code, it's still doing what someone told it to do, even if it has some fancy algorithms in it to ‘learn’.”

He says there’s no substitute for the hard work supplied by an actual software developer.

“I may be proven wrong, but all of the world's problems are certainly not going to be resolved by artificial intelligence,” Litz says.

Find Out More About Purdue University Global’s IT Degrees

How Understanding Business Can Help Your IT Career
Data Analytics Career Guide: Is Analytics for You?

*Employment and Career Advancement: Purdue Global does not guarantee employment placement or career advancement. Actual outcomes vary by geographic area, previous work experience and opportunities for employment. Additional certification or licensing may be required to work in certain fields.