Purdue Global students compete in both campus-based and virtual cybersecurity events. Cybersecurity competitions enable students to develop their skills for the workplace, network with peers and employers, and gain hands-on experience relevant to their studies.

Read more about cybersecurity competitions on our blog. 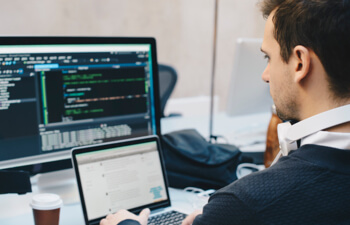 Collegiate Cyber Defense Competitions (CCDC) are held annually at the state level, with winning teams going on to compete in the Midwest Collegiate Cyber Defense Competition (MWCCDC) and national competitions. Teams act as newly hired network and security administrators for a small company and must defend against an active cyberattack. Students have an opportunity to network with industry professionals while testing their cyber knowledge in a real-world scenario.