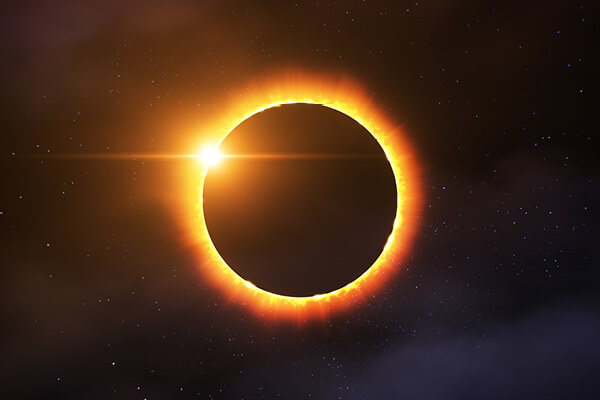 Viewing the Eclipse Through a General Education Lens

By now you have heard there is an eclipse happening on Monday August 21, 2017. What would be more exciting than viewing the Great American Eclipse through special safety glasses or a homemade pinhole box? Looking at the event through the lenses of four School of General Education disciplines of course! Below are five excerpts provided by Purdue Global faculty from their respective fields.

A total eclipse is a rare event, one that can be seen in any given area is rarer still. With so much digital paraphilia around to record the event, writing seems an auxiliary tool to fill space in publications and websites. Most of what is written tomorrow will be dry summaries of events, but that should not be the only writing that is done. Consider that ancient civilizations viewed all astronomical phenomena as a portent, so they documented all types of astrological events because of their importance to the social fabric. Experts still consider their impressive renderings on walls, paper, and cloth works of fine art. The most evocative documentation they left appears in writings. Witnesses composed physical descriptions that included the event but added the dimensions of observed human behavior and personal reactions. Centuries later, readers see the eclipse and how it impacted others through the ideas of writers. Among the eclipse glasses, pinhole cameras, and other tools should be a journal. Everyone—young and old—can record what they see and experience so that future generations learn not only that the moon passed between the sun and Earth on August 21, but also how people felt as they observed this rare phenomenon.

Here in my hometown of Atlanta, the eclipse will occur at 2:37 pm and just in time for schools to face the question of what to do about it. The problem is that the solar eclipse poses a very real risk. Physicians have warned us that viewing the solar eclipse directly can cause temporary or even permanent eye damage. This raises the question: should teachers and school administrators keep children inside? At my daughter’s school, they have decided the safest course of action is to keep the children inside and view the eclipse on  television. Naturally my daughter wishes me to take her out of school so she can “not look” on her own terms. Schools across the nation are taking similar steps to protect curious eyes. They understand that simply telling children not to do something is often an invitation to defy the rule. It would be unethical for schools not to take precautions with this event which poses a risk. We certainly expect kids to stay inside during a tornado, thunderstorm, or any other potentially threatening natural event.

To complicate matters, we are warned that some glasses being sold are actually fake and not safe at all. Popular Science explains that in the rush to produce and sell solar eclipse glasses some manufacturers have skipped the certification process that determines if enough light is blocked (Feltman, 2017). Like many of life’s events, the eclipse reveals the good and the bad in people. There will always be those who seek to profit at the expense of others. Thankfully there will also be those who seek to care and protect. It all comes down to motives which of course is ethics. How we respond to those who make unpopular decisions but who have good motives is also an ethical issue. I hope everyone will show patience for those entrusted to care for our children even if they err on the side of caution.

Children have a natural curiosity about the world around them that is seemingly endless. Any parent who has tried to answer unanswerable questions such as “why is the sky blue” and “why is water wet” will concur. Children are born with a thirst for knowledge and a quest for answers. Many of these questions can be answered by science, but engaging children with science can sometimes be difficult. The solar eclipse on Monday, August 21, offers a unique opportunity to connect children with science with a built-in "wow factor" that they will likely only experience once in their lifetime.

As your junior scientists gaze into the sky on Monday, remind them that scientists from across the globe will be doing the exact same thing. Astronomers and other scientists will be gathering in various parts of the country to glean information about the solar eclipse. In fact, data gathered from the solar eclipse will be the inspiration for scientific experiments for decades to come. Scientists plan to use measurements and data gathered to learn more about the sun’s outer atmosphere, known as the corona, to determine the energy output of the sun.

While solar eclipses occur more often than you might think, they are typically only visible from certain parts of the world. Scientists predict that the next solar eclipse that will be visible from all places in the United States will not happen for over a century, so take advantage of this rare event to share some real life science with your children. Grab your protective eclipse glasses, and be prepared to answer a lot of questions!

There are two ways to understand a documented history of total, solar eclipse depictions within the lands that we now know as the United States: written accounts and archeological depictions. In the modern era of astronomy (post American Civil War) there have been 15 total, solar eclipses between 1869 and 1979 recorded by astronomers within the United States (wunderground.com, 2017). Prior to modern, astronomical records historians must rely on textual and archeological evidence. A prime example of textual, historical evidence is the documented, total solar eclipse over Philadelphia, Pennsylvania on June 24, 1778, by David Rittenhouse (greatamericaneclipse.com, 2017). Historians know about this event because David Rittenhouse corresponded with Thomas Jefferson and those letters are available at the Philadelphia Historical Society (Philadelphia Historical Society).

Monday’s total, solar eclipse will be viewed, photographed, and otherwise documented by millions of Americans. Yet, historians know that previous people who lived on the same lands also took the time to record this wonderful, natural phenomenon.

A solar eclipse happens when the moon’s “umbra,” its relatively small area of shadow on Earth, completely covers the face of the sun. This is a happy mathematical coincidence involving similar triangles between the distances and sizes of the moon and the sun.

This means that the sun is approximately 422 times further away from Earth as compared to the moon.

Since the apparent size of any object is related to its distance to you, we have a happy mathematical coincidence: The diameter of the sun is about 400 times larger than the diameter of the moon AND the sun is about 400 times farther from Earth as compared to the moon. The moon and the sun look about the same size as each other! So, when the moon happens to pass in a straight line between Earth and the sun, we get a total solar eclipse!

As you safely gaze at the eclipse, consider not only the magnificent event you’re witnessing, but also how much such events have impacted various fields of study throughout time and how you might even be inspired to take the next step toward a career in one of those areas by joining us at Purdue Global.

*At Purdue Global, your safety is our primary concern. Please take precautions if you plan to view the eclipse, including the use of special eclipse glasses that protect your eyes. NASA has outlined a safety plan for viewing the eclipse—please consult the website below for additional information.

Behind America’s decline in math, science, and technology. Newsweek. (2013) Retrieved from https://www.usnews.com/news/articles/2013/11/13/behind-americas-decline-in-math-science-and-technology?context=amp

Eclipse of the Sun blamed on a Black Squirrel. (n.d.). Retrieved August 18, 2017, from http://www.firstpeople.us/FP-Html-Legends/EclipseOfTheSunBlamedOnBlackSquirrel-Choctaw.html

How often do solar eclipses occur? (2017) Retrieved from https://www.timeanddate.com/eclipse/how-often-solar-eclipse.html

When Tcikabis Trapped The Sun. (n.d.). Retrieved August 18, 2017, from http://www.native-languages.org/atikstory.htm

Educational Psychology, Its Role in Improving How You Learn
Is Online Teaching Right for Me?